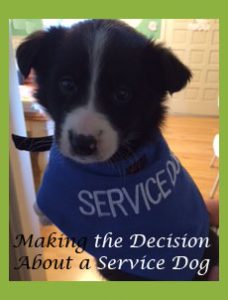 Almost seven years ago, we had a daughter that was born with Down syndrome. There are so many questions at a time like that. We wanted to know if she would be able to walk and talk, how well would she be able to function in her world, and how much help would she need.

You don’t get the answers to these questions right away or all at once. You just start taking one step at a time and handle things as they come.

Initially, we researched everything. We talked about a Service Dog. We weren’t sure if we should buy a puppy to raise along side our daughter or should we wait until she was older. We had questions about whether we should buy a puppy or a trained dog and what breed of dog would be the best. This is so hard to know when you are rocking a precious infant that you don’t even know yet the issues that you might be facing.

So, because of that, we held off on even thinking about a Service Dog.

Every few years, the thought would come back up again. Our daughter started walking at 17 months old. We used the stroller a lot when we were out and about. When grocery shopping, she would ride in a shopping cart. But as she has grown, she has gotten too big for these options. She would walk in stores and on outings with our family. We had to hold her hand and watch her at all times. If we didn’t, she would take off running away from us at any moment. She didn’t understand the dangers and why she shouldn’t do this. We talked to her many times and tried to explain to her. She saw her older brother and sisters and how they did not do this. We tried reward systems, but none of these things stopped the behavior.

There are times at home that she would open the door quietly and take off outside.

She also doesn’t sleep very well at night, waking up quite a bit.

Some of these things have gotten better. But we still have felt like we cannot trust her not to run off. She doesn’t pay attention to where we are and remember to stay with us or let us know if she is going to play somewhere else.

In December of 2015, we had a very scary incident in the store that caused us to think about a Service Dog again. I became very anxious about going to crowded places where our daughter might not stay with us and then very easily might become lost. There are reports on the news about children with disabilities that wonder from their homes and there are search parties trying to find them. All of these things continued to increase my anxiety over the safety of our daughter.

My nephew called one night to check on our daughter and we were talking about my concerns. He told me about a friend of his that raised border collies and had trained one to be a Service Dog for her brother, who also has Down syndrome. He gave me her phone number and encouraged me to call her.

I hung up with my nephew and immediately called the number. She answered and we talked for two hours. She told me about her brother, who is a couple of years older than our daughter. She told me about how she trained to border collie to stay with her brother and, at times, gently nudge the child back to an activity that he would try and stray away from. The dog would step in front of her brother to stop him from roaming into traffic or away from them in stores. The dog was trained to stay with the family in stores and help the brother stay with them. It sounded so amazing! She told me that it gave her Mom more peace of mind when they traveled and were out in public, crowded areas.

Then she told me that she had a litter puppies born just the day before. The father was their Service Dog. The mother was very calm and a great personality. The puppies would be great and very useful in a Service Dog capacity. We decided that I would talk to my husband and pray about the decision. She would be listing the puppies for sale in the next two weeks, so we had some time to make the decision.